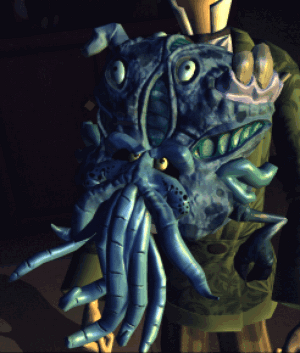 Yog-Soggoth (also spelled Yog Soggoth) is an elder god involved with the plot of The Devil's Playhouse. He is also known under the alias "Dr Norrington".

Yog-Soggoth has been worshiped and feared by people on earth since prehistoric times, and may be far older than even that. When his grandson Junior got restless, he brought The Devil's Toybox and the Toys of Power over from his home dimension. Ultimately some Molemen got hold of one of those toys, the Cthonic Destroyer, and used it to banish them back to the Dark Dimension from whence they came. For the rest of recorded history Yog-Soggoth's worshippers have gone to great lengths to acquire the Toybox and Toys, knowing the terrible potential they hold and the havoc they can wreak if brought together.

In 1901, his particularly fanatic worshiper Anton Papierwaite vexed Sameth & Maximus into stealing the Devil's Toybox from The Tomb of Sammun-Mak from him. He then held Sameth in captive and tried to force Maximus into summoning Soggoth. However, Maximus and Sameth trick Anton into saying the words using Charlie Ho-Tep; this absorbs Papierwaite into Yog-Soggoth, making him immortal, but also temporarily disabling him. Yog-Soggoth has a fragment of his soul implemented into that of Papierwaite's, and resides on his torso now.

Papierwaite, while Sam is on a bathroom break, steals the Devil's Toybox in The Tomb of Sammun-Mak (this frees General Skun-ka'pe allowing him to steal Max's brain). Off-screen, "about an hour" before They Stole Max's Brain! takes place, Skun-ka'pe and Papierwaite begin fighting over each others objects (eventually fighting in front of the Sign Spinner, Frankie the Rat and Hubert Q. Tourist). They later reach and continue their fight at the Museum of Mostly Natural History; however, when they both see their hatred against Sam, they ally with each other to turn against him. When Sam and Sammun-Mak in Max's body first teleport to Papierwaite's office he will demand Papierwaite to continue his alliance with Skun-ka'pe (despite their brutally sour relation).

His voice assists/helps/quests Max as a brain in a jar in Sammun-Mak's alternate reality. He helps Max defeat Sammun-Mak and return to the original reality.

His true form is revealed in Beyond the Alley of the Dolls, as an octopus-like creature residing on Papierwaite's torso. He teaches Sam and Max the history behind Junior, the toys and the toybox. He later participates captive in Sam and Max's battle against Charlie Ho-Tep who tries to revive Junior. He eventually is shot by the "Cthonic Destroyer" which kills anything from the dark dimension; however, with his last breath he unlocks the true psychic potential of Max unlocking all of his powers in a true form that helps defeat Ho-Tep.

After Max transforms into a giant Elder God after Charlie's defeat, Yog-Soggoth, Papierwaite, Sybil and Sam all join together to close the season.