Michael Barrett
“Time out for number one!”

Whizzer is a recurring character in the Sam & Max Telltale video game series. Along with his brothers, Specs and Peepers, he often crosses paths with the Freelance Police. He is one of the main antagonists in Season 2.

Whizzer is one of the three Soda Poppers, along with his brothers Specs and Peepers. ”The Soda Poppers” was a show within the Sam & Max universe which starred the Soda Poppers as children. Whizzer is known for his habit of frequently using the restroom, which we can assume is what earned him his name. This condition is only agitated by Whizzer’s self-diagnosed soda and designer bottled water addiction. Whizzer once stared in adult diapers and erectile dysfunction ads. Whizzer became the first governor of the newly formed West Dakota after his brothers, who are the governors of North and South Dakota, combined their territories and divided it into thirds. The three siblings also briefly ruled hell together. As a demon, Whizzer looks identical to Peepers. He can also urinate fire in his demon form.

Whizzer is a 3-foot tall man with freckles and a shaved beard. His eyes are brown and he has curly red hair.

Whizzer, hypnotized like his two brothers, is seen at Bosco's store giving away Brady Culture's videotape freely to anyone who wants them. Bosco doesn't appreciate this, and asks Sam and Max to arrest him at all costs. Later, there is a car chase between him and the freelance police.

Later, Whizzer acts as a judge for the show "Embarrassing Idol". Whizzer is biased towards his brother Peepers, and openly states that he'll vote for him regardless of performance. Whizzer gives up being a judge when Sam gives him a tomato covered cake, which he is allergic to.

In episode 104, we learn that Whizzer is the governor of West Dakota. He founded a program called "The Soda Abuse Prevention Program". His program is focused on resisting soda addiction, something he himself can't do. Later, while drunk (Sam gave him vodka without Whizzer knowing), he accidentaly caused a war between the Dakotas by telling Peepers that Specs insulted him.

Whizzer, along with his brothers, went to the North Pole to return their presents to Santa because they were not satisfied with them. The present he received was a see-through nightie. He thinks that's beautiful but that he doesn't have the hips for it. During the whole episode, he and his brothers do not want to enter Santa's workshop because they hear gunshots. At the end of the episode, Whizzer and his brothers send the possessed Santa Claus to Satan and wish a Merry Christmas to Sam and Max.

In the final episode, Episode 205, Whizzer is ordered to commit the original sin. So he goes to Stinky's to try to sell his apple ciders. Obviously, his cider has no success at all, which is a big dissapointment to him. Later, with his demon form (which is none other than the exact same outfit as his Soda Popper one but black with flames instead) he and his brothers fight against Satan as well as against Sam and Max. He suddenly has a super power which is to pee fire. He is defeated when Sam brings them a cake and the three of them blow out the candles. Whizzer, alongs his brothers, falls into the pit of hell and seemingly dies while melting in the lava.

Whizzer is very close to his two brothers. They are always together and do pretty much the same thing.

Like his brothers, Whizzer hates Sam and Max because of them the Mariachis never came to their birthday and also because the cake with the tomatoes on top of it caused severe diarrhea.

He is voiced by Michael Barrett. 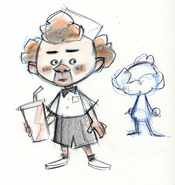 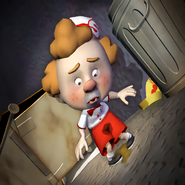 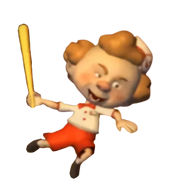 Names in other languages