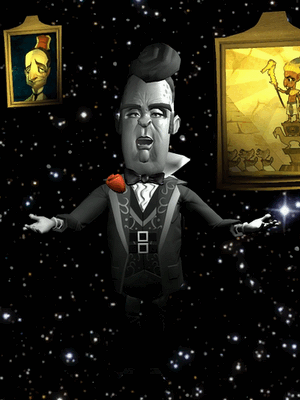 The Narrator comments on and strings together the episodes of The Devil's Playhouse. In The City That Dares Not Sleep, it unveils he is actually a personification of Max's Superego.

The voice of the Narrator was used in the preview site, and The Narrator himself appears in the trailer. He makes further appearances in each episode, usually opening and closing an episode, talking directly to the player. He lives deep inside of Max's brain. The Narrator is seen in black-and-white except for the red rose on this chest. He appears to be a likeness of Rod Serling, host of the famous 50's /'60's era sci-fi shows "The Twilight Zone" and "Night Gallery", and of which the Devil's Toybox series is a homage to.

At the beginning of The City that Dares Not Sleep, the Narrator shows pictures of almost all of the characters from The Devil's Playhouse series so far, stating that "one of the characters you see before you" will betray Sam & Max before the end, and that he will appear again around the halfway point to give the player a last guess as to who it is. However, he himself is also standing among these portraits when he says this. When the halfway point occurs (right before Sam enters a locked door in Max's brain), he indeed makes good on this and begins a rundown of the characters yet again. However, Sam unexpectedly walks in, interrupting the monologue and revealing The Narrator's true location. After Sam demands answers, the Narrator explains that he is Max's superego and has been getting frustrated about Max ignoring him his entire life and using the Toys of Power - at least, in his view - too irresponsibly. He arranged some of Max's problems in an attempt to kill him - even though that means killing himself and destroying the entire East Coast of the USA along with them. Thus, this reveals that he is the "character before you" who will betray them - as even though he seemed omniscient and disconnected from the events that transpired, he was counting himself amongst these characters when he stood among their portraits.

When Max later commits his first truly selfless act by telling Sam and the others to save Sybil, the Narrator realizes his mistake and tries to save him, but then Max gets hit by a nuclear-armed Maimtron and they are transported to General Skun-ka'pe's Flagship and die from the blast.

It is unknown if Max X has his own personification of his Superego as well.

Retrieved from "https://samandmax.fandom.com/wiki/The_Narrator?oldid=8804"
Community content is available under CC-BY-SA unless otherwise noted.