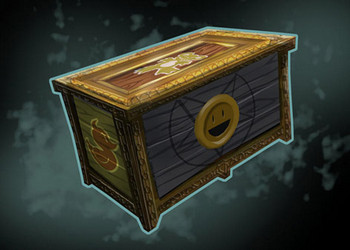 The Devil's Toybox is a prized chest that plays an important part in The Devil's Playhouse. It was created to store The Toys of Power, and grants great power when doing so: the more Toys that are in it, the greater the reality-shattering powers an owner with The Gift can wield.

Like the Toys it was made to store, the Toybox comes from the Dark Dimension, where it belonged to the elder god Yog-Soggoth and his grandson Junior. When they were banished back to the Dark Dimension the Toybox was left behind, and it has come into the possession of a number of mortals since. Around 6000 years ago it was found by lowly frog-catcher Sammun-Mak in Egypt, and helped him rise to become the ruler of Egypt. After his death it was sealed in his tomb and protected by molemen cultists until Sameth & Maximus recovered it in 1901. They later handed it back to the molemen to keep below where The Office would later be, where it stayed until Sam & Max stumbled on it in The Penal Zone. After that it has been fought over by General Skun-ka'pe and Anton Papierwaite, briefly reclaimed by Sammun-Mak, and then obtained by Charlie Ho-Tep, who ended up accidentally destroying it.

Even though the toys are destroyed in Beyond the Alley of the Dolls, their powers remain active inside Giant/Monster Max (as seen in The City That Dares Not Sleep) because of his memories of them. When he is later electrocuted, most of the powers are temporarily destroyed, outside of Astral Projection (and seemingly Rhinoplasty, as going into Max's Inventory and attempting to interact with certain objects will still result in Sam being turned into either a Roomba or cactus), but at least one power (teleportation) appears to be restored after Sam and Co. leave Max's body.

The Cthonic Destroyer is repaired by General Skun-ka'pe, making it the only physical toy still intact.