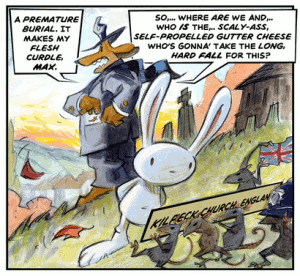 The Big Sleep is a 12 page webcomic by Steve Purcell featuring Sam and Max which appeared on the Telltale web page from December 9, 2005 to April 18, 2007. It was the first major comic adventure featuring the Freelance Police in over a decade. It was made concurrently with the first season of the Sam & Max episodic game series by Telltale Games.

The Big Sleep won the 2007 Eisner Award in the category Best Digital Comic.

After waking up from apparently having been buried alive years ago, Sam & Max find themselves in the 21st century at the graveyard at Kilpeck Church, England. Sam digs an earwig out of his head and keeps it as his "lucky vermin pal", which turns out to be a big mistake. Not much later, she digs her way back into his skull and makes him fall into a coma.

Max takes him to a doctor, but the doctor turns out to be Nigel the Hook, an old archenemy behind the whole thing. Max holds him off while Royal Cockroach Neurosurgeon Sir Kenneth Blattodea -who appears at just the right time- takes care of things inside Sam's head. Inside, Sir Blattodea stumbles on an entire colony of bugs and sacrifices his own life to take them out. Meanwhile Max manages to beat Nigel the Hook and throw him out of the window. After Sam gets back in shape they take an airplane back home.

Concepts
Add a photo to this gallery

Retrieved from "https://samandmax.fandom.com/wiki/The_Big_Sleep?oldid=6478"
Community content is available under CC-BY-SA unless otherwise noted.