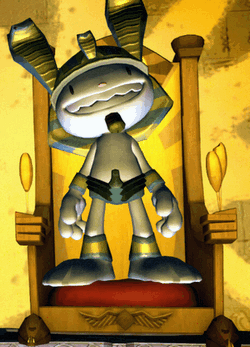 Sammun-Mak is a Child Pharaoh of Egypt, original human user of The Devil's Toybox and main antagonist of They Stole Max's Brain!. His name is obviously and ironically a portmanteau of the term "Sam and Max"..

The son of a sandal merchant in ancient Egypt, Sammun-Mak was a simple frog catcher until he discovered the Devil's Toybox. Since he had The Gift, he became able to use the Toys of Power, ascending to the status of being a pharaoh. As a result of his ruthless tyranny, he was overthrown in a populist revolt instigated by Molemen, who removed his brain and placed it in a jar. After that, Sammun-Mak's history fell into obscurity, his name being forgotten. He became known only as "The Great Pharaoh". His brain remained in the jar until it was recovered and, along with several other artifacts from his time, brought to the Museum of Mostly Natural History, which later became managed by Papierwaite.

In They Stole Max's Brain!, Sam snatched Sammun-Mak's brain from the jar and placed it in Max's body to keep Sal from incinerating it. Sammun-Mak agreed to help Sam get Max's brain back in exchange for a new body when they were done. When they recovered Max's brain, Sammun-Mak spotted the Devil's Toybox and reclaimed it, twisting reality into one in which he is the supreme ruler of the world and everyone, besides Molemen, are devoted to him. After Sam and Max, with help from the Molemen, used the brainscrew to remove his brain again, reality was turned back the way it was and Max's brain returned to his body.

In The City That Dares Not Sleep, Sam, controling one of his clones, found Sammun-Mak's brain again. Skun-ka'pe had recovered it and fitted it into his spaceship as a replacement for Gordon the Brain to control the ship. In the end of the episode, his brain was presumably destroyed along with the rest of the ship.