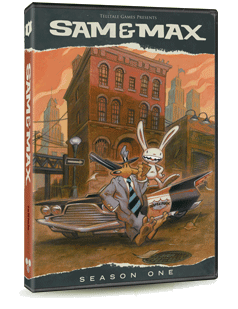 This season of Sam & Max has a remaster called Sam & Max Save the World Remastered, released on December 2nd, 2020 on PC and Nintendo Switch by Skunkape Games. It completely remasters the first six episodes with new visuals, music, higher quality sounds, interface, and is able to be played with a keyboard and gamepad. 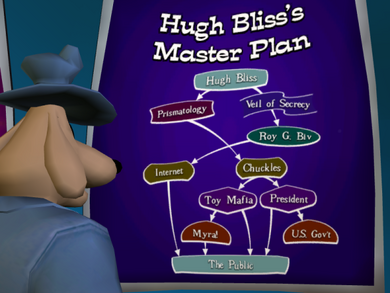 On May 10, 2007, Telltale announced that they would release a hybrid DVD for Season One subscribers in June; holding all six episodes of the game as well as hours of bonus material, including commentaries, behind-the-scenes info, and all of the machinima shorts. The disc is available to those who buy a Season One subscription, plus the price of shipping and handling. It was released July 28th.[3].

A boxed release of Season One Remastered was announced to be released on April 30th, 2021 through Limited Run Games. There were three editions of this product: the Nintendo Switch Standard Edition, the Nintendo Switch Collector's Edition, and the PC Collector's Edition. Both of the collector's edition releases contained not only the games but the original releases and original Telltale special features, prototype hypnosis glasses, an Alien Love Triangle times front page, Toy Mafia Casino fridge magnet, Max for President campaign button, and Bosco's virulent disease napkin, and several additional postcards and prints. The Switch release also included a Nintendo Switch branded Sam and Max slipcover.

Retrieved from "https://samandmax.fandom.com/wiki/Sam_%26_Max_Save_the_World?oldid=9061"
Community content is available under CC-BY-SA unless otherwise noted.