Sam & Max: This Time It's Virtual

Edit
This article is a stub. You can help the Sam & Max Wiki by expanding it. 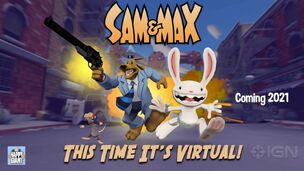 Sam and Max: This Time It's Virtual is a VR adventure game developed by Happy Giant, released on the oculus quest store on July 8th, coming soon to Steam and a PSVR release is set for early 2022. It was announced on August 27 during Gamescom 2020. Players will be recruited and trained as one of the few, the proud, the miscreant Freelance Police. As a new cadet, the player will be put through a series of graded courses set up inside an abandoned theme park, which probably harbors a dark and dangerous secret. As players progress, they'll put their new skills to the test in Sam & Max's neighborhood, as well as other locales that defy description.