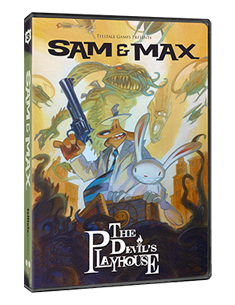 Sam & Max: The Devil's Playhouse (colloquially known as Sam & Max: Season Three) is the third season of the Sam & Max (video game series) by Telltale Games based around the characters of the Sam & Max comic series created by Steve Purcell. The first episode was released on April 15, 2010, and the last one – on August 30, 2010.

The 2010 release date was confirmed by Telltale as a hidden bonus after the credits of Episode 5 of Tales of Monkey Island, where a banner waved against the night sky emblazed with the Max & Crossbones. It then simply said "2010" and gave the URL of a teaser page: www.samandmax2010.com, where one can infer that this season will pay an especially heavy focus on outer space and telepathy.

Rumors were circulating that Telltale was trying to design this game completely without the traditional point-and-click interface, but the gameplay doesn't seem to have changed.

Sam & Max have come to learn of the "Toys of Power", toys that Max is able to use to perform various psychic abilities such as teleportation and precognition. They first use the toys to stop the alien General Skun-ka'pe from destroying the city, who has come to Earth to seek out the Toys himself, and banish him to the Penal Zone. During this mission, the Freelance Police encounter a cult of Mole Men who have been watching over a mysterious artifact called the Devil's Toybox. By watching some dusty film reels, they learn that their great-grandparents, Sameth and Maximus, were chosen by the cryptic Mr. Papierwaite to retrieve the Toybox from the Tomb of Sammun-Mak, an ancient Pharaoh. However, when they successfully recovered it, Papierwaite attempted to use Maximus's psychic powers and the Toybox to summon the Elder God, Yog-Soggoth, and bring about the end of the world. Sameth and Maximus managed to stop Mr. Papierwaite by tricking him into saying the summoning words himself and then tasked the Mole Men of the time with watching the Toybox in the basement under their office building.

Just before the last reel is played, Sam goes to the bathroom and returns to find that somebody has stolen Max's brain. After interrogating several suspects, Sam tracks the brain stealer to the Museum of Mostly Natural History, where he temporarily re-animates Max's body by putting the brain of the Pharaoh Sammun-Mak into Max's head. Together, they discover that Skun-ka'pe who has escaped the Penal Zone and that Mr. Papierwaite who is somehow still alive are fighting for possession of the Toybox and Max's brain. Seeing Sam, they form a temporary alliance and plan to use Max's brain to recollect the Toys of Power and energize the Toybox. Investigating the museum, Sam witnesses an exchange between Papierwaite and a seemingly invisible being called Dr. Norrington. He also meets the museum security guard Sal, a cockroach, who is working for Mr. Papierwaite who has become the museum's curator. Though Sam is able to break up the alliance between Skun-ka'pe and Papierwaite, Sammun-Mak in Max's body activates the Toybox and creates an alternate reality where Sammun-mak rules over all. Max, who is still a brain inside a jar, Dr. Norrington and the Mole Cultists are the only ones to remember the previous reality and together, they convince Sam that he must get close to Sammun-Mak and remove his brain from Max's body. After evading both Papierwaite and Skun-ka'pe, Sam removes the brain and normal reality is restored. Sam returns Max's brain to his body but they find themselves surrounded by an army of Sam clones, who recover the Toybox and begin a search for the remaining toys.

Taking shelter along with the Stinkies and Skun-ka'pe, who is soon abducted by the clones, at Stinky's Diner, Sam and Max uncover a mysterious cloning chamber underground where the mysterious 'Clone Master' is using the clones to gather the toys of power. They begin a search for the Clone Master and soon meet Mr. Papierwaite and the enigmatic Dr. Norrington who is revealed to be the elder god Yog-Soggoth. The two explain that they were fused together when Sameth and Maximus disrupted Papierwaite's ritual in the past. Yog-Soggoth further explains that the Devil's Toybox is that of his own son, Junior, and if all the Toys are returned to it, Junior will be summoned and bring about the end of the world. Sam and Max learn that Momma Bosco is missing from Boscotech and after calling her back in a seance, she reveals that she was paid handsomely by the Clone Master to supply the technology. Sam and Max help to restore her to life using the cloning machine in exchange for her help. Back in Stinky's Diner, Flint Paper is interrogating Stinky over the mysterious underground passages and exchanges between Stinky and her lover 'Mr. S'. Sam and Max help her escape from the Diner and then follow her to a meeting with Mr. S who is revealed to be Sal. Shortly afterward, the two fall under the control of the Clone Master but with their indirect help, Sam and Max follow the clones to where the Toybox has been taken. Before they can recover the toy box, they are stopped by Charlie Ho-Tep, one of the Toys of Power in their possession who reveals himself to be the Clone Master. Sam and Max are captured and taken to the Statue of Liberty where Charlie Ho-Tep plans to complete the ritual to summon Junior in the hope that he will be played with. With the help of Dr. Norrington and Papierwaite who have also been captured by Charlie, Max unleashes his psychic powers so that he no longer needs the Toys to defeat Charlie and destroy the Toybox, ending the threat. However, Max accidentally swallows some of the goo left by Junior, causing him to turn into a giant beast.

1 Week later, Max has been ravaging the city and Sam forms a strike team alongside a heavily-pregnant Sybil who has just returned from her honeymoon, Dr. Norrington and Papierwaite who intend to get inside Max and reverse the changes. Inside, Sam takes control of Max's giant body with the help of Sal, who dies from heavy radiation poisoning. Sam then meets with Max's Super-Ego, who tells him that he plans to blow up Max's brain and take the city with it. In order to destroy the tumor and stop the Super-Ego, Sam recovers the Cthonic Destroyer from the now teamed-up Skun-ka'pe and Girl Stinky with the help of Flint Paper but before he can use it, Sybil goes into labor. Max's subconscious suddenly shows signs of sacrifice, wanting to save Sybil and the Super-Ego decides that he has been wrong and that he will save the city rather than destroy it. Sam and the others escape and the Super-Ego teleports Max to the location of Skun-ka'pe's ship before he explodes, seemingly killing himself,Max Girl Stinky Sammun-Mak and Skun-ka'pe in the process. Despite Momma Bosco's best efforts, they cannot clone Max and Sam walks off by himself. At the last moment, he is greeted by the parallel universe Max (from the previous season, Sam & Max Beyond Time and Space) who have both undergone similar experiences. Together again, the two head off on another adventure.

A map of New York, Reality 2.0 Goggles, A newspaper referencing Abe Lincoln Must Die!, The satanic record from Ice Station Santa, Mugshots of Brady Culture, Hugh Bliss and Jurgen, A Unicorn from Bright Side of the Moon, Two souvenir magnets from The Mole, the Mob and the Meatball, Sam playing his banjo in Situation: Comedy, A newspaper from The Penal Zone, A Fudgy Freeze, Sam's gun, A notebook from Max's desk, A newspaper referencing Reality 2.0, A newspaper referencing Ice Station Santa, Curt, A 'Chimpa Bar', A Bosco's timecard, The Deed to the United States, An issue from the Alien Love Triangle Times, A cockroach, A ticket to The Zombie Factory, A newspaper about an unknown case, Max's Luger, A poster from The Tomb of the Sammun-Mak, Two medallions from They Stole Max's Brain!, Sybil's coffee mug, A bottle of 'Purecell root beer' A picture of Girl Stinky, A picture of President Max and a rocket launcher Max from The Penal Zone.

In order of release:

Retrieved from "https://samandmax.fandom.com/wiki/Sam_%26_Max:_The_Devil%27s_Playhouse?oldid=8888"
Community content is available under CC-BY-SA unless otherwise noted.