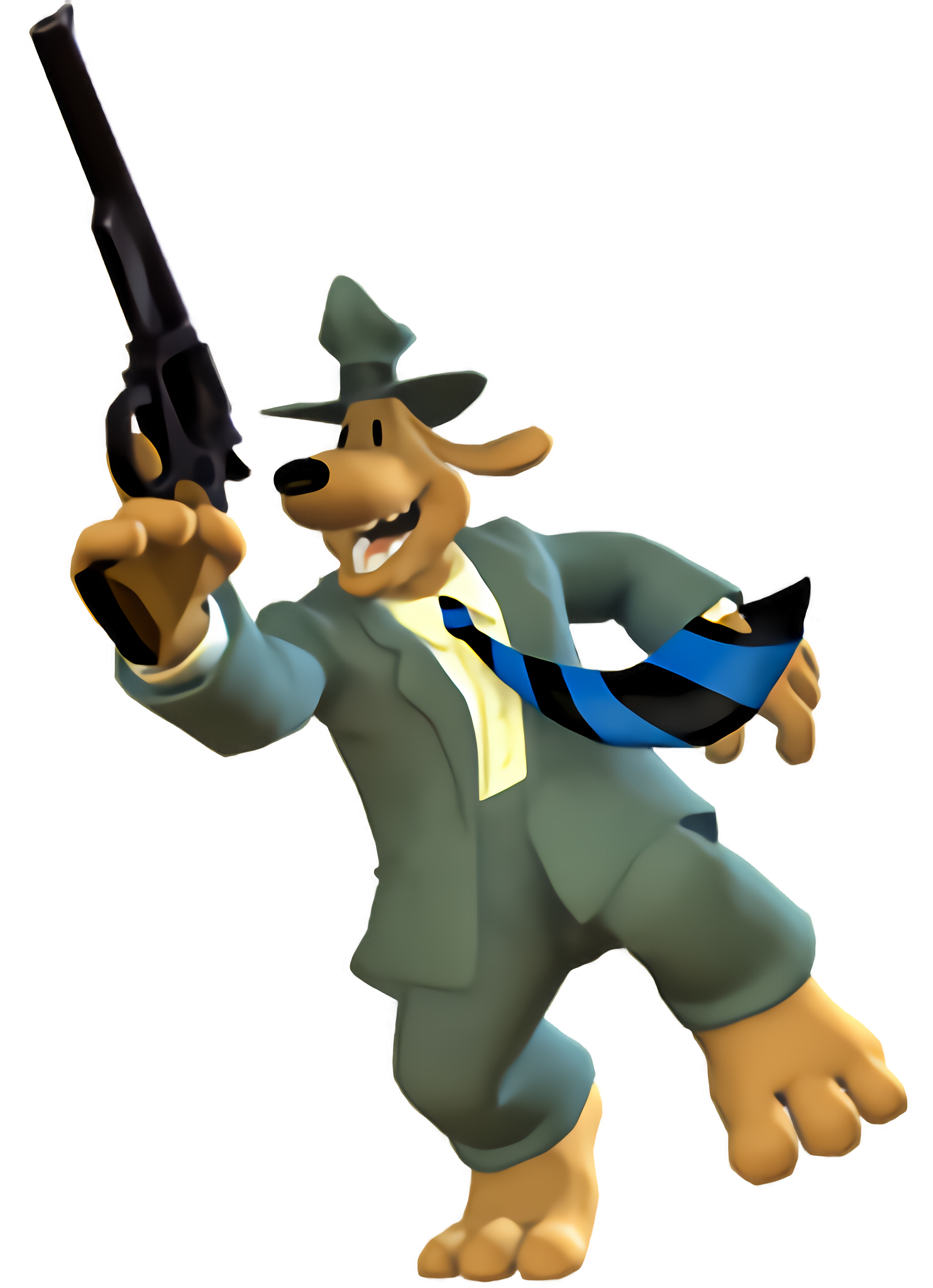 A member of the Freelance Police, Sam comes off as more level headed and less violent than his partner Max, albeit not by much. He typically wears a grayish film noir-styled suit, with a hat and a blue and black striped tie and barefoot. In the games, he has a tendency to take everything he sees, and apparently keeps the items in a cardboard box that he carries inside his coat.

Sam is prone to long-winded sentences filled with elaborate terminology. He rarely loses his temper and is able to react to panic-inducing situations with extreme calm. When he does get angry, however, he tends to react in an uncharacteristically savage manner. In They Stole Max's Brain, Sam shows his more violent manner of investigating then the previous episodes, which include from beating a gorilla for showing a dog sign, to using a gun on a COPS member. It is usually, and somewhat ironically, Max that calms him down and prevents him from acting upon his anger.

He also has a very large sweet tooth, as during many of his adventures and assignments he can be seen enjoying a multitude of frozen treats such as popsicles and ice cream sandwiches, especially in the comics. In Sam & Max Season Two he becomes self-conscious about his weight, particularly when seeing his future and past selves.

Sam carries around a huge revolver. In the comics, he is quick to use it but is a very lousy shot. In the Telltale episodes he can hit any object on the first shot but is very reluctant to use it against living things, even villains. The gun is absent in the other incarnations.

Although most of the time he acts like a human, Sam sometimes behaves like a dog. He has growled several times in the Telltale games, and his sobbing in Sam & Max Hit the Road sounded like whining. He seems to have an enhanced sense of smell; he was able to smell where Max parked the car in Monkeys Violating the Heavenly Temple, and located the cereal aisle in Beast from the Cereal Aisle and the concession stand in Night of the Cringing Wildebeest by their non-food scents. He has also been shown to enjoy dog treats. It has been speculated that he is some sort of Irish Wolfhound.

Sam has been addressed as Samuel twice, by Bosco in The Mole, the Mob, and the Meatball, and Max in Bright Side of the Moon. Presumably, this is his real name.

Sam's family first appeared in the comic The Damned Don't Dance, but only his father was explicitly pointed out. In Hit the Road, his mother leaves a message on the messaging machine reminding him to not get shot. Sam's grandmother, Ruth, who served as a prison warden and fought in the Cold War, was mentioned in some comics and sketches, but not actually seen until the animated series episode Christmas Bloody Christmas. The Final Episode mentions that his family lives in Alaska. This episode also mentions his grandfather, who "bought it in the Big One", and shows Sam's younger sister. In the episode Tonight We Love, Sam is reminded of his Aunt Trudy, who has some sort of problem with knives, when he and Max go to Love Land. Finally, he has an Uncle Rallo to whom Sam sold his baseball card collection for a kidney, not wondering why his uncle needed it until later.

Max.
Ruth.
The Geek.
The color orange.
Shooting out the office window at passers by.
Running over things.
Glazed McGuffins.
"Treeetz" puppy treats.
Fudgey Freezes.
Musicals.
TV and using what he learned from it.
His DeSoto.
Messages on the message machine.
Playing Fizzball.
Car/road trips.
Buddy Hackett
Highway Surfing

Receiving a pink belly.
Told to pick up objects he doesn't want to (or even can't altogether) pick up.
Being called McGruff.
The Soda Poppers.
Cartoons.
Suicide.
Having his mind read.
Being touched (Mainly on the shoulder).
Cracks about his weight
Riddles

When talking to the Commissioner on the phone, Sam's part of the conversation is typically completely minimal, consisting only of one word reactions to what the commissioner says. In voiced appearances, these follow each other so quickly that it seems impossible for the commissioner to actually tell Sam the things he does.

Holy jumping mother o' god in a side-car with chocolate jimmies and a lobster bib! We're on our way!
- In Monkeys Violating the Heavenly Temple

In Monkeys Violating the Heavenly Temple, Sam & Max meet some frightening pirates and every Season One episode, Sam utters a long-winded non-sequitur at the end of his phone conversation with the commissioner. This phrase usually starts with "Holy..." and is inevitably followed up with "We're on our way!".

"You crack me up, little buddy."Edit

Many comics and cartoon episodes, as well as Hit the Road and a few Telltale episodes, end with Sam saying this line or a variation on it in response to something Max says (Max's end varies). It is occasionally used at other points of a story as well.

"Can't think of a reason not to."Edit

Sometimes when Max suggests a course of action in a situation, Sam goes along with it if he finds nothing wrong with Max's reasoning.

Young Sam has been in all three mediums Sam and Max has been in. Always shown round and stocky, he has a reserved and shy personality with a few mentions of breaking into tears because of bullies. Max always sticks up for him by beating up whoever Sam says picked on him. Young Sam is usually shown to wear a black T-Shirt with Max's face on it. No explanation on why such a shirt would even exist has ever been given.

But when he is in his element and/or comfortable, Young Sam is positive and outgoing. He was quite rude to his older self in Chariots of the Dogs.

In the Telltale game series, it is revealed that he is a computer wiz and loves building things from scratch, including Bluster Blaster. He is also shy around girls and doesn't bother with them, because they're only interested in Max. However, Max mentions in Bright Side of the Moon that Sam missed his chance to go to the prom with Melanie Prendergast, so he mustn't have been too shy about asking girls out. In addition, because of his passive nature, Max steps all over him.

Not much is known about Sam's teenage years other than he may have played sports, was into science, and found high school "awkward". He was also fairly tall and skinny.

Old Sam was first seen in the animated series' episode The Dysfunction of the Gods where Sam and Max undergo rapid aging. He sometimes walks around with a cane, wears old bifocals, and suffers from lapses of judgment.

In the Telltale episode Chariots of the Dogs, "all those years of adventuring have taken their toll" on Future Sam. He suffers from dementia and maneuvers around in a wheelchair (with a design based on Davros from Doctor Who).

Kid Sam in the animated series. 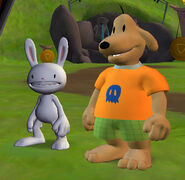 Teen Sam in The Final Episode.

Old Sam depicted in the animated series.
Add a photo to this gallery

Retrieved from "https://samandmax.fandom.com/wiki/Sam?oldid=6851"
Community content is available under CC-BY-SA unless otherwise noted.