Poker Night at the Inventory 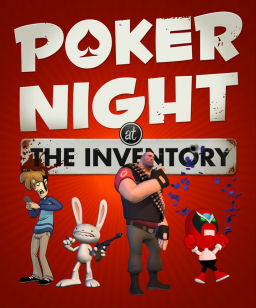 Poker Night at the Inventory is a poker video game developed and published by Telltale Games. Poker Night is a successor to Telltale's first poker game, Telltale Texas Hold'em, though the game's original characters were dropped in favor of various licensed characters from other media. Max appears as a tournament opponent, with Sam making a brief cameo.

The existence of the game was revealed through a survey created by Telltale on May 15, 2009, which was meant to gauge fan reaction to a sequel to Telltale Texas Hold'em.[1] One of the survey fields regarded a potential sequel's name, ranging from Telltale Texas Hold'em Insanity to more joke related titles such as Unprofessional Poker and Dogs Playing Poker. This game would then become known as Poker Night at the Inventory when it was released in late 2010.

The Inventory is a well-hidden speakeasy that was founded in 1919, underneath Dick and Kent's Games and Amusements. It was created in response to a first draft of the 18th amendment of the United States constitution which would have banned the production of games and entertainment as well. The unseen proprietor of The Inventory decided to hold a poker tournament, and invited five individuals to partake in the event.

Upon arrival, the individuals were led through The Inventory to the table by the host of the tournament, Reginald Van Winslow. The five individuals participating in the tournament were Max, Strong Bad, The Heavy, Tycho Brahe, and a mysterious figure known only as The Player. Sam was also allowed into The Inventory, but he never made it to the poker room as he was left wandering the many hidden passages around the speakeasy. The Inventory sold Banang, however Max still hated to hear the word after Sam overused it while rescuing Bosco from T.H.E.M.

Max would sometimes try to cheat, using one of The Toys of Power, The Eyes of Yog-Soggoth. Max also commented that his latent psychic powers had returned. However, the other players didn't notice or didn't care, as his impulsive behavior negated any benefit that foresight into the future would provide.

When Max decided to buy-in without money, he thought about using the 38 to 40k he had in uncut diamonds, but instead wagered his Luger and Sam's badge. When The Heavy did the same thing with Sasha, his Iron Curtain mini-gun, Max commented that it was beautiful. This common ground of shooting caused Max and The Heavy to bond. During their camaraderie, The Heavy thought that he'd seen Max somewhere, and Max asked him if he went to the Spiro Agnew School of the Arts. Max didn't attend, but he and Sam did arrest their gym teacher during a sting operation to stop a black market jock strap ring in the '80s. During that sting, Sam choked the gym teacher, a large man with a unibrow, to get him to submit. Despite his lust for killing, or maybe because of it, The Heavy told Max he was afraid of Ghosts. Max told him that he can handle any ghost for The Heavy if needed, since he had experience with vampires and zombies.

Max and Strong Bad also got along well, as Strong Bad didn't include him when calling the other players jokers. However, Strong Bad did mistake Max for a pokemon, and thought it would be funny if a pointy haired kid stuck him inside of a baseball. After he said this, Max wondered if Strong Bad was talking about the red-capped kidnapper who terrorized the fauna on the Upper West Side. Max then mentions that he, Sam, and Flint Paper caught him trying to stuff a chimpanzee into his knapsack, and made him cry for his mommy. When Strong Bad said that the poker tournament's stakes were low, Max mentioned that he didn't have as much money as he used to. He had a sizable checking account in 1992, but closed it when he and Sam were learning to launder money, supposedly for research purposes. Max doesn't share Strong Bad's taste in music, as he and sam mostly listen to the police scanner or to the Johnny Cash cassette that's stuck in the tape deck in the DeSoto.

Max and Tycho have an amicable conversation as well. Max wonders if the pacific northwest has much crime, but Tycho mentions that they have as much criminals as other places, but no real villains. When Max mentions greedy corporate monsters, Tycho states that used video game resellers fit that definition. Listening to the music in the speakeasy, Max mentions a case where a bunch of hippos escaped the zoo, fell into league with a criminal blues band and started transporting illicit goods across the east river. This led Tycho to talk about his love of giraffes, which led Max to just stare at him, horrified. This look of disbelief was returned on Tycho's part when Max mentions that Flint Paper beat up a poker instructor who was given money to teach Jimmy Two-Teeth how to play Omaha, thinking it was a scam. Flint also beat Artie for misunderstandings on other occasions. One time was when Flint thought that Artie was trying to steal ten thousand dollars from the tenants in The Office when he asked for donations for a 10K race for charity. Another time was when Artie won a tournament and stated that he owed his credit union a lot of money, leading Flint to think that Artie rigged the tournament. Tycho tried to tell Max that each case was a misunderstanding, but Max was still alright with Flint's actions regardless.