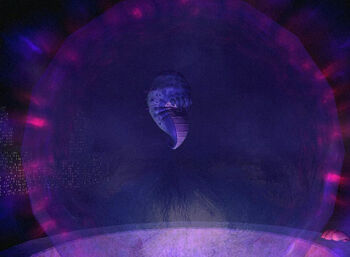 Junior is an elder god that almost destroys the world in Beyond the Alley of the Dolls.

Junior is the grandson of Yog-Soggoth and youngest of the elder gods, but still immensely powerful. It is said that his birthing wails resounded across the galaxy and caused the breakup of the proto-continent Pangaea. After moving from the Dark Dimension to our own he became restless, and his grandfather brought in The Devil's Toybox and The Toys of Power to calm him down. Later the two of them were banished back to their home dimension by Molemen while the Toys and Toybox stayed behind. Yog-Soggoth has since tried to get them back, since Junior "will not shut up about it".

Charlie Ho-Tep was disliked and insulted by Junior. In Beyond the Alley of the Dolls, using the help of Sam and his Samulacra, Ho-Tep almost succeeds in reviving Junior; but is foiled when Yog-Soggoth, Sam and Max trick him into destroying the toybox. Junior presumably was destroyed or returned to the dimension.

Despite Max's statement that he might have landed on/swallowed Junior, it is implied in The City that Dares Not Sleep that an overload of Max's Psychic Powers is what caused the transformation. In this sense, Yog-Soggoth's unlocking of Max's abilities in Beyond the Alley of the Dolls was the direct cause of Max transforming.

Retrieved from "https://samandmax.fandom.com/wiki/Junior?oldid=7595"
Community content is available under CC-BY-SA unless otherwise noted.