View source
watch 01:36
We're Getting Mutants in the MCU - The Loop
Do you like this video?
Play Sound

Hover over the map below for captions, click for a short description. 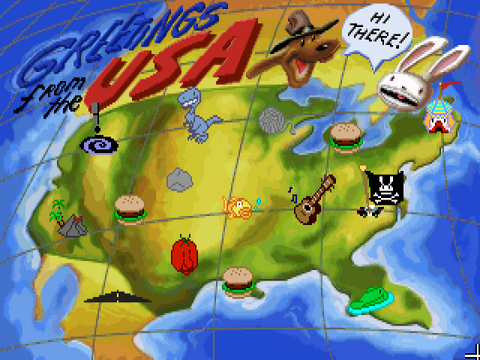 A typical gas station with accompanying store. Three different ones can be visited in the game. One of them has a clerk resembling Bernard Bernoulli, one of the main characters in Day of the Tentacle.

Snuckey's is based on the real-world roadside convenience store chain Stuckey's, which was featured under its real name in On the Road. Similarities include the general shape as well as the pecan candy being sold.

A carnival operated by the Kushman Brothers. The Kushmans enlist Sam & Max's help to recover their star attractions, Bruno and Trixie. The carnival hosts a variety of things referenced before and after Hit the Road, including the Cone of Tragedy, the Human Enigma, and Jesse James' severed hand.

The World's Largest Ball of Twine

An enormous ball made out of a single continuous strand of twine, the largest in the world by 92 yards -until Sam and Max cut off 93 yards later in the game. Constructed by Bruno and a bunch of other bigfoots in 1956. The Ball has a small museum dedicated to it and has a rotating fish restaurant on top (famous for its candied lutefush in choco sauce), accessed by cable car.

Several real places in the US claim to be home to the biggest ball of twine.

Based upon its location on the map, this World's Largest Ball of Twine appears to be in Darwin, Minnesota. According to the hint book, it is located in Marutilamooh, Minnesota; the name is said to be a native American expression criticizing the treaty policies of President Grant.

The World of Fish

A fish market with a few exhibits, located in Mosquitoville, Missouri. Provides the World's Largest Ball of Twine with fresh fish each day.

A driving range in Rheumy Eyes, Florida, famed for its alligator theme. It was originally a miniature golf course, but was converted after it was flooded with swamp water and infested with 10-foot long alligators in 1989.

A nexus of paranormal activity located in Gullwump, Washington, featuring floating furniture, an upside-down room, and an interior that looks like a joint painting by Salvador Dalí and M.C. Escher. Likely based on the Mystery Spot. According to the hint book, the paces operates with the Unified Field Theory: size = color / magnetism. A set of magnets creates a combination of colors allowing Sam and Max to change their sizes and access the size of door of that color.

A hard to find rock that allegedly looks like a frog (but actually, not at all). The exact location differs per playthrough.

A place in North Dakota where one can bungee jump out of Mount Rushmore and visit animatronic dinosaurs. There is a tarpit with a queue of little children waiting to have a tar bath and play.

A museum in Goatliver, Texas exhibiting vegetables resembling celebrities, run by Violet, an old flame of Sam's. One can find a Bumpus-shaped eggplant. Specific carvings can be commissioned, such as for John Muir.

Locations mentioned are: the Enchanted Argyle Forest, the Inexplicable Valley of Lights, Mount Badrich, the World's Largest Stump, and the Eternal Plane of Acid Rain.

They are all visible from the Largest Ball of Twine restaurant. The Frog Rock is somewhere between them.