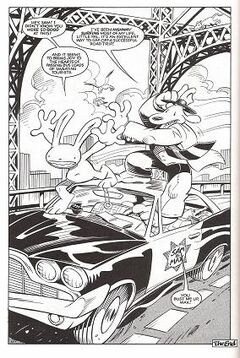 Highway surfing is an activity Sam and Max like to engage in which consists of standing (or lying) on top of the DeSoto while it is cruising along the highway. Sam controls the car by steering with one foot while doing this. Presumably some form of cruise control (built-in or otherwise) is being used as well.

While the only story highway surfing appears in is On the Road, it has nonetheless become a bit of a Sam & Max icon, being prominently featured on the cover of both editions of Surfin' the Highway (which is named after it), in the intro to the animated series, as a minigame in Sam & Max Hit the Road and on a promotional painting for Season One (made partly to allay fan concerns about highway surfing no longer being possible on the new open-top DeSoto).

In Sam & Max Season 1. Highway Surfing is used multiple times... it is used in:

Episode 3 - The Mole, the Mob, and the Meatball

Retrieved from "https://samandmax.fandom.com/wiki/Highway_surfing?oldid=6096"
Community content is available under CC-BY-SA unless otherwise noted.