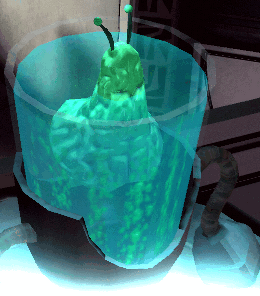 In The Penal Zone, Gordon explains that before he was captured by General Skun-ka'pe, he was extremely popular on his planet, and was of a species apparently resembling the platypuses of Earth. Like Max, Gordon possesses the gift, which he used to impress the women of his planet. He was trapped on board General Skun-ka'pe's Flagship, promised candy by the warlord. Skun-ka'pe kept his brain, using it to harness of abilities of the Toys of Power.

By the time Skun-ka'pe arrived on Earth, Gordon's brain had apparently died. He was brought back to life by the Freelance Police, after which he assisted them in stopping Skun-ka'pe and using the Toys of Power. He appears to die again near the end of the episode after using his last bit of energy to distract Skun-ka'pe.

Retrieved from "https://samandmax.fandom.com/wiki/Gordon_the_Brain?oldid=7583"
Community content is available under CC-BY-SA unless otherwise noted.