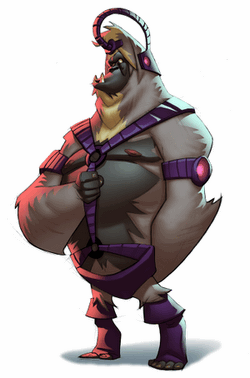 General Skun-ka'pe (nickname Skunkape) is a power-mad alien space gorilla who is the main antagonist of the first episode of Season Three, The Penal Zone. He is also a major antagonist in They Stole Max's Brain!, a minor character in Beyond the Alley of the Dolls and a major antagonist of The City That Dares Not Sleep. His real name is Arthur J. Thompson.

In They Stole Max's Brain!, Sam discovers that Max's brain was stolen. Eventually, after interrogating Frankie, Hubert and the ex-minion, he locates Skun-ka'pe and Papierwaite. When both of them realize how much they despise him, they create an alliance to team against him. It is also revealed that Skun-ka'pe actually spent years in the penal zone (compared to the hours it was in the real world) due to how time works differently there. He also notes that he holds a hatred against Papierwaite and his employee while talking with Max as a brain.

After Sam places Sammun-Mak's 6000-year old brain into Max's body, they both successfully botch Papierwaite's and Skun-ka'pe's partnership by destroying Sal and Papierwaite's Yog-Soggoth tapestry. Unfortunately, while they both are fighting, Sammun-Mak steals the Devil's Toybox. When Sammun-Mak then reshapes reality, he turns Skun-ka'pe into a gladiator to battle convicts to the death. According to Frankie and his betting buddies, he has six signature moves he uses to defeat his opponents. Additionally, he is defeated while battling Sam. He is saved from this alternate reality when Sam and Max defeat Sammun-Mak.

In The City that Dares Not Sleep he is reunited with Girl Stinky (leaving Sammun-Mak and Gra-pea'pe at his ship and attempts to help her with her plan to kill Grandpa Stinky at the Cloning Chamber, which is to swap the brains of Gra-pea'pe (one of Skun-ka'pe's minions) and Grandpa Stinky, to trick Flint Paper into killing Grandpa. He is eventually thwarted by Sam when he tricks Skun-ka'pe into thinking a granite rock is the Devil's Toybox. Completely defeated in all of his plans, Skun-ka'pe retreats to space in his spaceship, taking Girl Stinky and the brain of Sammun-Mak with him. The ship (and it's inhabitants) is eventually destroyed when the transformed Max teleports to the mothership just as the nuclear warhead implanted inside his chest goes off.