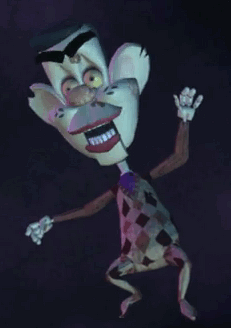 Charlie Ho-Tep was one of The Toys of Power and the main villain of Beyond the Alley of the Dolls.

Charlie was one of ﻿the Toys of Power from the Devil's Toybox from the Dark Dimension. Unlike the other known toys, Charlie had a mind of his own and could control himself. Though he later claimed to be the favorite toy of Junior, the youngest of the Elder Gods, he was despised by him. According to Dr. Norrington, he used to call him "Creepy Charlie". Charlie first appeared in The Tomb of Sammun-Mak, when he was spat out from the Toybox and found by Sameth and Maximus, Sam and Max's great-grandparents. Their use of him was instrumental in retrieving the Toybox and preventing Papierwaite from using it to summon Yog-Soggoth. At the end of the adventure, the toys and Charlie were scattered among the city. A few months prior to Beyond the Alley of the Dolls, he contacted Momma Bosco and paid her a "gajillion" dollars to build a few hundred of her cloning tanks. He then used those tanks to create an army of Sam clones (he later explained to Sam that he used his DNA so the clones would be easy to control) and unleashed them onto the city to retrieve the Toys of Power. Once they were all gathered, Charlie revealed himself to be the Clone Master and had the Sam clones knock Sam and Max out.

When Max woke up, Charlie had set up a nest in the torch of the Statue of Liberty, using Sam as a host and playing a piano, with the Devil's Toybox, with Max's toys inside it, and the Cthonic Destroyer by his side. In the top of the torch was a fetal-like Junior who was being fed Sam clones as part of a sacrifice to re-awaken him and bring the Dark Dimension to this reality, destroying this one in the process. When Max made his way up there with help from Norrington and Sam, Charlie ascended into the air to complete the ritual. When Norrington told Max that he had all the powers of the toys inside him, Max, his full psychic potential awakened, ascended into the air as well and entered a fight with Charlie. After being tricked into destroying the Toybox, Charlie was destroyed along with it and the other toys.

Charlie possesses psychic powers whose strength surpasses even that of Max when his powers were at their peak. Apart from his ventriloquism powers, he can shapeshift into objects even without first obtaining their shape from a picture. He can also enthrall people ﻿to do his bidding. Charlie often proves to be very short-fused and sensitive about Junior's affection. If someone claims he disliked him, Charlie attacks them with whatever's handy, quickly and furiously.

"Hotep" (Egyptian for "to be at peace") is a common suffix in Egyptian names. Charlie's name is likely a reference to Nyarlahotep, an evil deity in the Cthulhu Mythos that The Devil's Playhouse is based off of.